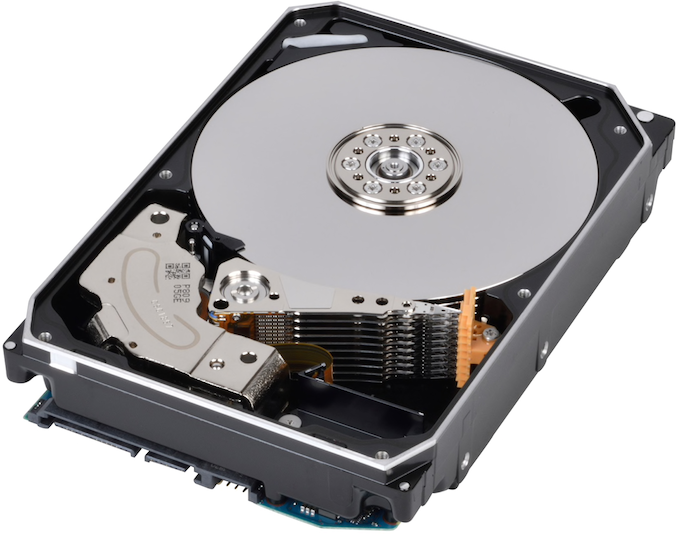 The Toshiba MG09-series 3.5-inch 18 TB HDD are based on the company's 3rd generation nine-platter helium sealed platform that features 18 heads with a microwave-emitting component which changes magnetic coercivity of the platters before writing data. The HD disks are made by Showa Denko K.K. (SDK), a long-time partner of Toshiba. Each aluminum platter is about 0.635 mm thick, it features an areal density of around 1.5 Tb/inch2 and can store up to 2 TB of data. The MG09 family also includes a 16 TB model which presumably features a lower number of platters (based on the same performance rating).

For modern enterprise and nearline 3.5-inch HDDs, Toshiba's MG09-series drives uses a motor with a 7200-RPM spindle speed. The HDDs are also equipped with a 512 MB buffer and are rated for a 281 MB/s maximum sustained data transfer rate. Unfortunately, Toshiba has not updated the random access performance of the new products, though it is likely that their per-TB IOPS performance is lower when compared to predecessors. The manufacturer will offer its new drives both with SATA 3.3 (6 Gbps) and SAS 3.0 (12 Gbps) interfaces as well as a selection of logical data block length.

One of the noteworthy things about Toshiba's MG09-series FC-MAMR HDDs is their power consumption. In active idle mode, they typically consume 4.16/4.54 Watts (SATA/SAS models), which is considerably lower when compared with Seagate's Exos X18 as well as Western Digital's Ultrastar DC HC550. As far as power consumption efficiency at idle (large hard drives could spend plenty of time idling) is concerned, the 18 TB MG09 is an undeniable champion consuming just 0.23 Watts per TB (in case of the SATA version). Meanwhile, the new drives are rated for 8.35/8.74 Watts (SATA/SAS SKUs) during read/write operations, which is higher when compared to the DC HC550 as well as predecessors from the MG07 and the MG08-series.

As the MG09 family of hard drives are intended for datacenter racks that accommodate hundreds of vibrating HDDs, they feature numerous enhancements to ensure consistent performance, reliability, and durability. Typically such enhancements include top and bottom attached motors, RVFF, as well as environmental sensors. Like all modern drives for 24/7 applications, Toshiba's MG09-series units are rated for a 550 TB average annualized workload, 2.5 million hours MTBF, and are covered with a standard five-year warranty. 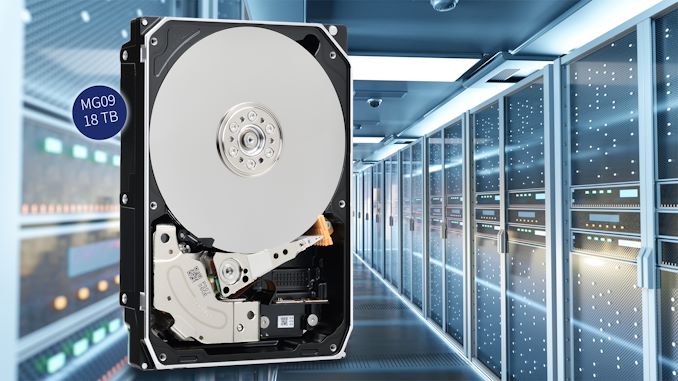 Toshiba has been working on its MG09-series FC-MAMR HDDs for at least two years already. Last year the company said it had made 'significant investments in manufacturing facilities' and promised to start shipments of its 18 TB hard drives by March 31, 2021. This week the company reaffirmed its plan and said it would begin sample shipments of its 18 TB MG09-series MAMR HDDs 'at the end of March 2021.'