One thing that always amazes me is that the PC tech industry rarely does technology demonstrations. In the car world, the likes of Audi, BMW, Porsche, and others, will create something unique for its fans once or twice a year, without any expectation of going on sale. It’s a way for the company to show off its engineering talent, and get some column inches in the process – it’s very entertaining for the engineers in the audience, and personally, I love it. In the PC space, the only company I work with closely that does anything like this is ASUS, perhaps once every couple of years. This time around we get a look at what the future might hold with the Prime Utopia motherboard, a concept design that pools together several new features and ways of thinking. 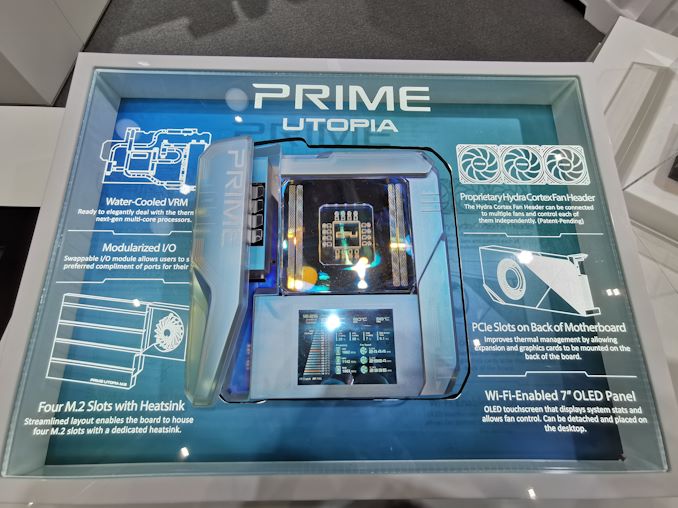 The Prime Utopia, as a tech demo, is designed to be socket agnostic: these features could be applied on any motherboard worth its salt, however anything futuristic is going to gravitate towards the high-end desktop market. The most striking feature on the Prime Utopia that is visually obvious is the 7-inch Wi-Fi enabled display on the front where the PCIe slots normally are. 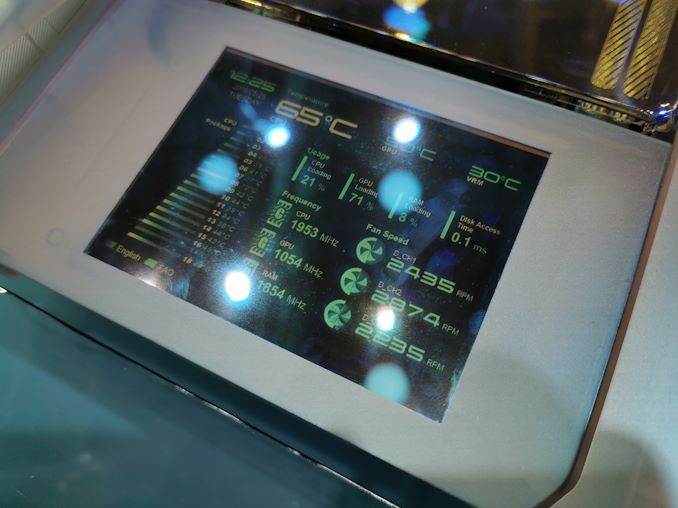 This is a high-resolution display, which could show items such as BIOS settings, fan curves, temperatures, voltages, or even a video. With a touch screen interface, a user could also apply settings, or overclock on the fly. Another concept for this display is that it would be detachable, like a smart home electric system. The display would be connected to a Wi-Fi module on the system that had the correct hooks to do these changes. 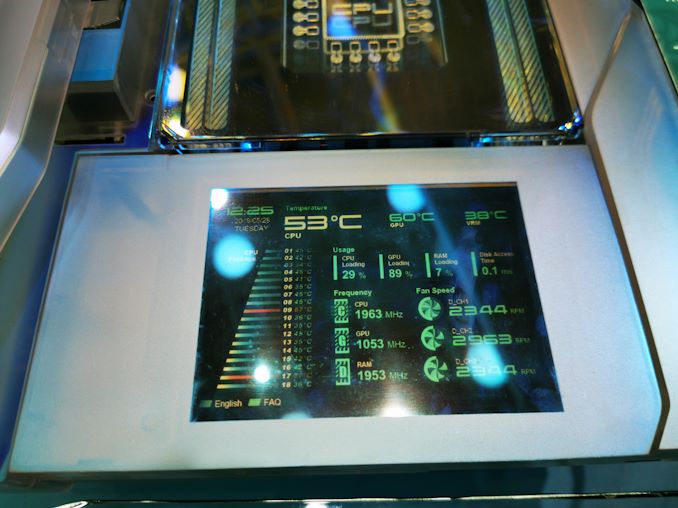 Behind the display module there are no PCIe slots. Instead we get four M.2 slots for storage, connected to the main chipset heatsink with an all-around shroud. The all-around shroud for the motherboard helps unify the design but can also apply some cooling efficiencies or EMI protection. The shroud hides the rear panel, where ASUS has upgraded its idea for a disaggregated / swappable rear IO platform. We saw this before on ASUS’ project Avalon SFF PC, whereby users could swap between a workstation focused rear IO, or a music focused one, or a storage focused one etc. In this instance, ASUS has made each of the rear panel features individually selectable. 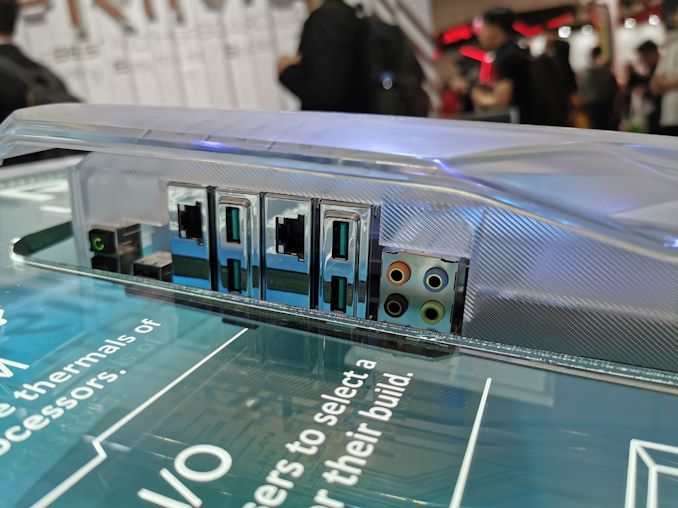 In the long term, this is all controller based – it would rely on the add-in devices to have PCIe-to-X controllers for each of the USB ports, Ethernet, Thunderbolt, audio and such, and given that some of those devices require more than one lane, could be tricky when it comes to mix-and-match. This is a problem that could go away by PCIe 5.0 it should be noted, where a number of regular features immediately become a single PCIe 5.0 lane. 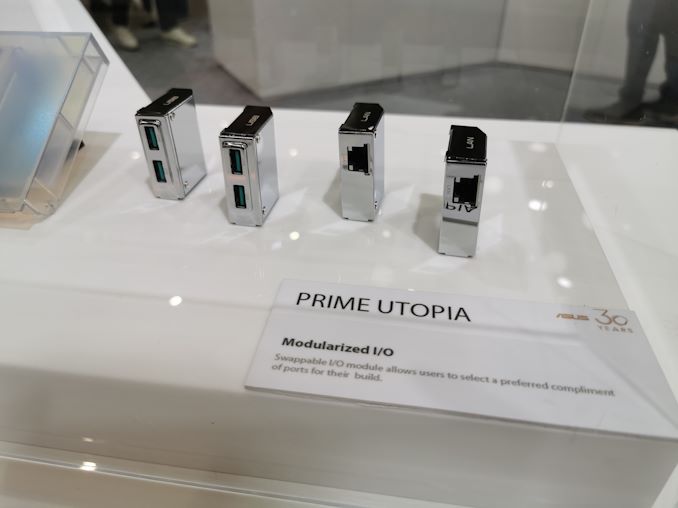 For the regular PCIe slots, ASUS has put these on the rear of the motherboard. Obviously there’s a small amount of lane re-organization to make this happen, but the idea is that with the motherboard in this configuration, the CPU and SSDs can be on one side of the system, while the GPUs can be on the other. ASUS hasn’t yet said how this motherboard would be installed into a case, which might be interesting in its own right. 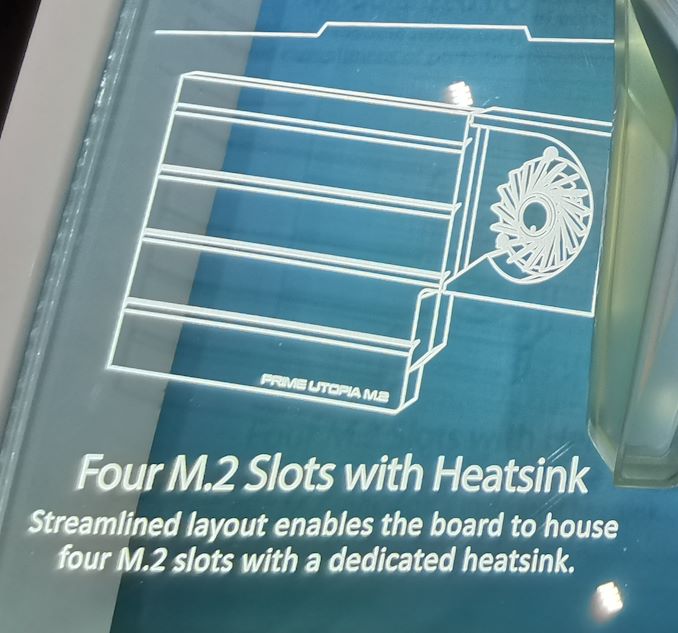 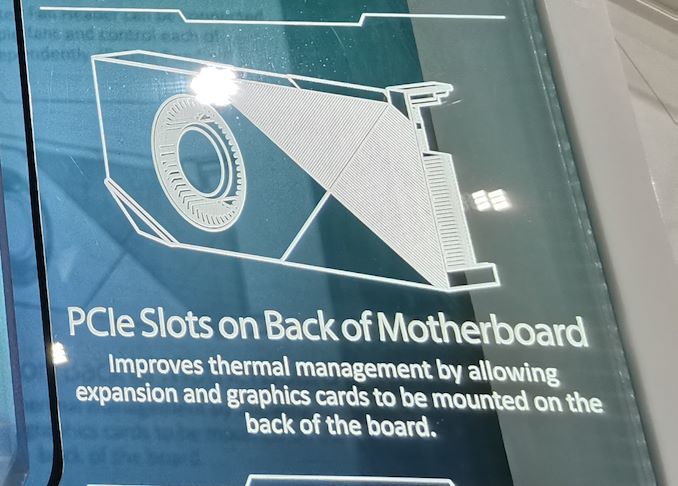 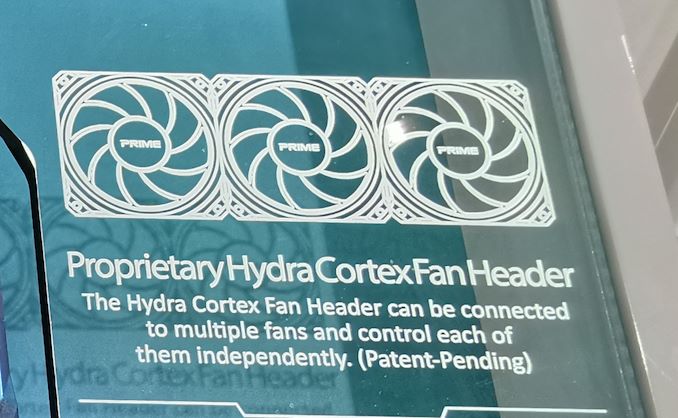 The final new feature is a proprietary fan header for ASUS’ new Hydra Cortex fan arrangements. The single header can be used to daisy chain fans together and yet still control each fan in the chain independently.

As mentioned, I’m a big fan of these technology showcases and one-off designs. It shows that a company has engineers willing to think outside the box and put their skills into the system to create something new. Motherboard innovation isn’t dead, we just limited by form factor and scale. The Prime Utopia won’t be coming to market, but I’m glad it exists.